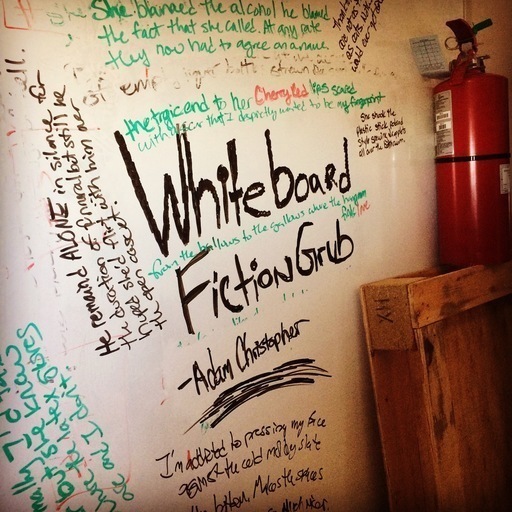 White Board Fiction Grub is an ongoing collection of flash fiction by Adam Christopher. Fiction for nobody.

Heretofore let it be understood what comes after before or during this notice is henceforth forever to be copyrighted. Henceforth understanding a notice can in some instances be interchangeable with a warning you would do well to also regard it as such. Nothing that follows resembles too closely any persons living or dead. Well-meaning as it may be to do so, it has not been done. Nor has any dead persons been included unless done so unknowingly and with little regard given to any persons identifying as living dead. If at any point, you begin to feel overwhelmed by a message considered to be offensive, it is also equally unintentional therefore; heretofore understood as accidental. For safety, all manner of meaning has been stripped away so that no such meaning, ill or otherwise, can be found. OK, good I think at this point no one followed you this close, not for this long. It’s probably safe to contact you here. I’m called the Narrow and I’ll be in-between and around until you can learn to find me on your own. It’s a lot I know, I’ll give you a minute to process it all.

Any existing parts, parts to exist, or well-planned but likely surprise updates will also henceforth be regarded as included part in party as extensions of existing portions however changed they may be with the passage of time. Let it also be understood a danger exists. Haphazardly redistributing a potent mix of half realized potential, it’s mutually understood by way of binding agreement, you not do so without my specific consent of which I'm without promise to give.

Safe to say at this point you’ve come to terms with all of this. Don’t look up at this point or it will look suspicious and you’ll draw attention to me. If I could've spoken to you directly I would have but you wouldn’t have understood. I could have tried but unless you know the meaning of the saying "Vest Cellar" then I’m not sure you really know the meaning of anything not to mention what I’d have to say. Oh dear I’ve gone on again. Ok well, let’s take a breather here. You weren't ready yet but if you've come this far I suppose you are now. The suspicion that's been welling up behind your eyes is for good reason. I bet someone already told you I don't exist. I did that actually it was me. See how seamless I can be when I want to be? I'm clever. Not the kind of clever you find in a movie about a Chuck Palahniuk book supersaturated with sarcasm. I'm talking about the kind of clever that's allowed me to stay hidden for so long. I’ll be in touch.

Go henceforth at risk of your own while also agreeing to take nearly nothing away while being ever vigilant in your daily dealings. Good luck charms heretofore travel around you in all things, partially in thanks to your agreement. Now go enjoy some soup. It’s safe to look up now.

Yellows and browns with hues of pale wheat swim listless in the bowl below a mid hope, cold rain, comfort and all other sir names for soup. A smile twists into existence inspired by a spoons wake.  Chunk-lets of processed food float into the liquid shape mouth before wandering off. They depart an expression now seemingly incomplete yet existing despite company. Optimism can't be tempted into existence but none the less she's been saying something for at least enough time for the soup to have surrendered it's last bit of warmth to the air.

Gathered bits sink into what first seemed like a silver life boat departing for a new type of freedom. Refugee letters destine for an adventure in digestion helping to pass the time beyond feigning an understanding of exactly what she's on about. Orphans from a smile are long dispatched from a brief  moment of pretending to agree with her. A bowl doesn't care what sort of table it perches nor does it take proper stock of any given situation. It smiles with whatever fills the space without being too particular about any given spoon. I move the semi viscous liquid counter clockwise erasing all memory of shapes suggested before in solidarity with her emotions.

She mashes words together with no regard as to how they feel next to one another making as much sense to me as Red Bull stickers on a moped. Crafting together  a particular brand of numbing nonsense making soup appear organized with purpose. Sandwiched between cut rate blinds, mayonnaised with composite wood walls, this whole trailer goes against the grain qualifying it as the worst sort of bowl or at best proof bread always lands butter side down.

Each passing wind mocks this structure with rocking left then right tossing back then forth not spilling even one letter to the ground. Maybe if  anything seemed something other than a result of circumstances beyond our control she'd have less to say or at least she'd have my attention. The couch fatally hemorrhages bits of once white stuffing across the living room helpless to watch it's innards systematically distributed counter clockwise around by the dog. Everywhere around here something is redistributing bits of everything occupying a space less so taken up by trappings of life.  It does serve to rejuvenate the very meaning of unpack, while providing undo ease to the idea of erosion. Everything gets unpacked around here no matter what baggage it arrived in.

Never could be recalled a time called good or a better soup. Good being warm, soup being any comfort, meal, or breakfast, along with all other sir names for soup. Perhaps in more polite company often referred to as Mr.Daniels. Ice cubs can swirl all the same such as letters in soup given ample opportunity. Opportunity being any occasion to celebrate a last remaining memory containing a recollection of mercy.

She's saying something but more likely still speaking. Rebounding letters free float around the atmosphere reverberating off swirling browns against the grain, then becoming an echo resembling a meaning unpacked for distribution immediately becoming  indistinguishable from any other sort of noise. As if this instance of particular noise will now create, spontaneously, something as miraculous as love which has some time ago been hemorrhaged.

She says "Are you listening to me?"

Continuing a dedicated eye contact with soup watching letters rearrange, sinking then floating, looking for answers that haven't yet naturally occurred, or at least, not otherwise already accounted for in echoes.

She said "I'm telling you my period is late."

Corporate policy that doesn't dictate behavior can lead to several complicated issues arising from the sins of lesser paid management to include secrecy wrapped in passion. Someplace near the center of explanations a conversation no longer centered around various tragic events of the previous day turns into discussing the importance of title. His gold name plate pined against breast pockets home to one pen, one note pad and a disbelief of what gets transposed into notes. In the middle of explaining to the fire chief I realize that voting in favor of my title being changed was where I went wrong somehow.

The blaze which emulated outward devouring all in its path did indeed hatch from my office. Standing in the remains of something that was so recently my desk amid air still heavy with a wet smoldering. I'm explaining to the fire chief the title of Building Manager was more of an honorary title really.

Did you know for instance, you can't get a pay raise if your title doesn't change? Changing from Vendor Manager to Building Manager didn't really put fire safety in my area of expertise. I did get a raise though. I can also tell you that indeed the blanket placed on top of a space heater under, possibly my desk, was placed there in the heat of passion. All this of course would have most very certainly be on the DVR footage. Wasn't even sure if there was a camera in that office if I'm honest. Safety first.

The tapes of any encounters that took place here, under that desk, over there a bit, and some on that wall right there, those encounters have now been safely burned out of existence. I don't know where or how far the server room is from this office but it looks like it was on the other side of what I remember now as having once been a wall. The fire burned the servers and all their memories away. I imagine a memory like that will burn in the minds of the two fire starters for all time regardless the lack of video evidence. Just as the location of the server room will burn in mine. When I think of things that could have prevented the fire? I think knowing where they kept the security footage would be high on the list honestly. Knowing she was married would have been the other.