46 Reads
0 Favorites
Get the App

The lake shimmered orange as the sun set pristine over the distant trees. The previous two nights had recharged Rolf's energies, and as he had departed the local inn, the barman had warned him to steer clear of Lake Ayer. A monster prowled the shoreline, Rolf was told, with the bounty raised to one hundred gold after three previous hunters had not returned. The fishermen were too scared to go near, travelling wagons were attacked and pillaged, so the city council spared no expense in the reward. Rolf was handy with a sword, handier than most, and he could already hear the clink of coins as he sauntered past an overturned merchant's cart, entirely gutted and torn to shreds. No bodies, Rolf noticed, wondering who had been brave enough to collect them.

The lake was still, hardly a breeze to ripple the calm surface. Rolf drew his sword as he approached the sandy shore of the lake, espying a dark figure hunched close to the water. The creature was crouched down, its back facing Rolf, using its arms to pick at something unseen in the shallow water. As Rolf approached, the monstrous figure turned its horrifying head. The beast's face flashed green in the dim sunset, black lips protruding from taut, scaly cheeks. Rolf's eyes met the leering, golden gaze of the creature, which lifted itself from its crouching position to turn to the traveller. It was a towering presence, long arms adorned with grotesque spikes at the wrist, an engorged belly scarred by numerous battles, and claws that Rolf did not want to be on the end of. The bounty would be won with lithe and nimble movement, Rolf knew, as he charged at the creature before rolling aside and swinging his steel. The sword caught the creature on the shin, yet barely left a scratch, the hilt vibrating painfully in Rolf's hand. Before he could raise his steel to protect himself, the creature brought down a vicious claw, striking Rolf on the shoulder and knocking him back.

The beast lunged forward towards Rolf, swinging aggressively with another heavy arm. Rolf saw it coming, however, and dodged the blow, lancing the beast on the right side of the abdomen. Green bile shot from the monster as it stepped back towards the water. Rolf saw an opportunity to strike and swung an overhead blow with his steel. The monster dodged with its face, but could not stop the thrust from cutting it deeply from chest to abdomen. The monster flew back, bleeding the green bile into the water and crashing into the water as it floated into the lake, motionless. Rolf was victorious. With heavy breath, Rolf sheathed his sword.

Rolf tended to his torn and bruised shoulder by the fire he'd built on the lakeshore. The night was nearly upon him, and he'd decided to rest til morning by the placid lake. As Rolf wrapped bandages around his shoulder by the flickering warmth of the campfire, a different type of light caught his eye. A soft, yellow glow began to emanate from the lake, gathering light from the surroundings and forming a humanoid shape. Rolf once again reached for his steel as the unknown glow took more detail. The face materialised into that of a gaunt man, brittle and ancient. The body glided from the lake with ease, though Rolf saw fragility in its movements.

Rolf raised his sword with a grunt, though stopped immediately as the figure lifted its arms in submission.

"Whoa there, traveller, I mean you no harm."

The dim, glowing figure moved closer to Rolf, taking its place on the opposite side of the fire. Though it was but a weak figure against the dark night, its voice carried firmly.

"I am the spirit of this lake, or at least, I have been cursed to lay here. Trapped below the water by that vile creature you have so courageously slain."

Rolf gazed over the lake to find that the creature was no longer floating in sight, and had most likely sunk into the depths. He resumed bandaging his shoulder. The spirit continued.

"I was a traveller like you once, head full of glory and pockets full of gold. I felt untouchable when I came past this lake, only to fall at the hand of the beast that roamed the shore. The battle was long, and I lost, but my soul was not allowed to leave this place. I am very tired."

Rolf eyed the spirit warily, recognising its features but unable to quite place it. He kept quiet.

"You have freed me, and you have my thanks. I can finally rest, but before I do, I wish to reward you."

The spirit turned its gaze towards the still lake, a deep sullen expression etched on the glow of its face.

“In life, my name was Augrin. Do the people still speak of me?”

Augrin the Mighty was a renowned dragonslayer, deeply embedded in the folklore of the surrounding towns and cities. Many stories spoke of his valour, his wit, his haunting golden eyes, and his unfortunate disappearance. The people mourned his absence, hoping one day he would return to them. The spirit smiled, noticing the familiarity his name had evoked in the traveller.

“You know who I am,” grinned the spirit “so you must know what I wielded.”

A faint glow began to rise from the shallows of the lake, and Rolf saw the glint of steel below the water’s surface.

“Soulsbane lays unused, wasting away in this cursed lake. You have proven your courage, proven your ability. My most prized possession is now yours, if you wish to retrieve it.”

Rolf turned to the spirit, and noticed that it was passing its arms through its ethereal body.

“I’d bestow it upon you myself, but this form... well.” Augrin told Rolf with a wry smile.

The sun had given way completely to the cloudless night sky as Rolf began to disrobe before stepping foot in the biting, shallow water. The spirit of Augrin stood next to him, forlornly eying the dim light in the lake, before fading slowly from Rolf’s sight.

Rolf waded through the muck, stepping cautiously through the dense, sinking mud underfoot. The light grew brighter above the surface as the spirit of Augrin once again formed, standing atop the water, lighting the path to Soulsbane. He was now only a few steps from the reward when Augrin sunk swiftly into the lake. Rolf, now in touching distance of the sword, reached his hand toward the glint of Soulsbane before stopping abruptly. The sword’s point faced towards the night's sky under the clear water, the hilt half-buried in the waterlogged mud. Rolf was not afraid to get his hands dirty, but what he saw at in the mud struck fear into his heart.

There was still a hand grasping the hilt.

Rolf turned to face the shore, hurriedly attempting to move back to dry land. A crash through the surface of the once serene water sent Rolf’s mind into terror, and he realised his feet had become entrapped in the sticky ground beneath the water. As he looked down, he saw the skeletons of countless men, armour rusted and bones covered in moss.

A roar from behind Rolf froze him in place, as he turned his head slowly to witness the chaos that was erupting from the rear. The sword was raised high overhead by a ghastly skeletal figure, skin sloughing off a barely obscured skull. The eyes burnt golden as it effortlessly glided towards the helpless Rolf. The figure came within striking distance, when suddenly it let go of the sword and ducked beneath the water. Rolf grabbed at Soulsbane in an attempt to defend himself, but it was no use. Two bony hands grabbed Rolf by the ankles and began dragging him backwards into the lake. Rolf fell face first into the icy water, unable to resist the immense pull from below.

Rolf struggled for breath under the water’s surface, falling deeper and deeper into the darkness of the lake.

With the last breath of air in his lungs, Rolf opened his eyes to see the beast he had slain float past him towards the shoreline, the fresh cut from the previous battle scarred and healed. Rolf held Soulsbane tightly as the bony fingers embedded him deeply into the mud below the lake. 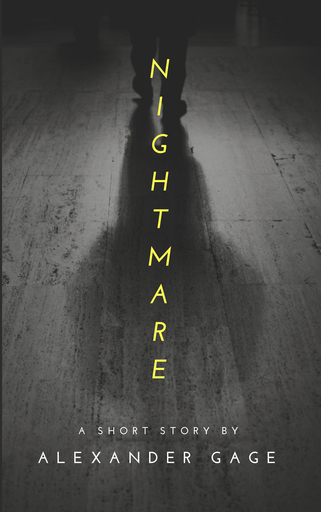