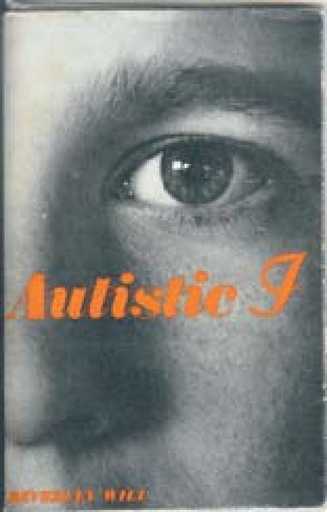 A day in the life of an Autistic child

86 Reads
1 Favorite
Get the App

The script on which the memorable 1969
Australian Broadcasting Commission
television feature was based.

The following was written in 1969

It is possible that historians in the twenty-first century, when recording the year 1969, will be more concerned with the outcome of a walk around Australia that with a walk on the moon. For the Apex Clubs of Australia are conducting a Round Australia Walkathon to raise $100,000 for research into the most baffling condition of childhood - Autism. A break-through in this area could shed light on other mental problems endured by people today.

When was Autism identified”
Autism was fir identified and defined as a disease as recently as 1943 by Dr. Leo Kanner of Johns Hopkins University in the United States of America. Before the isolation of the condition, autistic children were labelled mentally retarded, and life offered them nothing better than existence in a mental institution or in a family hide-away.
One might contemplate, with some sadness, the many autistic children who, over past centuries, have simply passed through life, unknowing, un-aided, unimportant.
What is Autism like?
Autistic comes from the Greek word auto, self, and thus provides a fair description of the condition, for in the world of the autistic child there is only one being, himself. This complete unawareness of others draws him into a tragic loneliness, made even deeper by the human reactions he provokes in those around him.
Left unaided, he becomes the loneliest human being on the face of the earth.
To quote Dr. Keith Benn, Psychiatric Superintendent of Travancore Clinic, Flemington, Melbourne: ‘To illustrate the difference between a normal young child and an autistic child, one might take the means each has of reaching a high object. A normal child points to the object, make a noise and tugs at an adult’s arm to draw his attention. The autistic child would lift up the adult’s arm and use it as a stick or extension of his own arm. The adult is a thing, not a person.’
To the autistic child language has no interest or significance - it is a jumble of meaningless sounds. Imagine yourself suddenly place in a room full of, say, Turkish people speaking their native tongue. Your confusion and frustration would be the same as that felt by the autistic child when we speak to him in his own tongue. His communication problem is so great that it has often led others to believe he is deaf and dumb.
Ironically, as I write this, I have before me an advertisement in a special ‘man on the moon’ supplement issued today, which says: ‘A total revolution in communications. You will see com-munications progress from the primitive to the ultra sophisticated.’ Doesn’t this make you wonder if ‘the big step for mankind’ was truly that one made by Armstrong? A small, sure step into the psyche of man might show that this is where the big step for-ward is to be made.
Although the two major symptoms of autism are ones of communication (i.e. inability to form relationships with other people either physically or through speech) other disorders might have been found to be peculiar to this condition.
Professor Rendle-Short, Professor of Child Health, Queensland University, in a paper presented at the first Australian Conference on Autism (Adelaide, South Australia, August 1967) lists:

The Thirteen Major Manifestations of Autism
1. Not cuddly as a baby. Either holds himself still or clings limply.
2. Standoffish manner. Communicates very little with other people. Uses them as objects rather than people.
3. Great difficulty in mixing and playing with other children.
4. No eye contact. Persistent tendency to look pas or turn away from people especially when spo-ken to.
5. Marked physical over-activity. Child may wake and play for hours in the night yet be full of energy the next day.
6. Acts as deaf. No reaction to speech or noise.
7. Prefers to indicate needs by gestures. Speech may or may not be present.
8. Unusual attachment to a particular object or objects. Easily preoccupied with details of special feature of this object, and has no regard for its real use.
9. Repetitive and sustained odd play, e.g. flicking pieces of string, rattling stones in a tin, tearing pa-per.
10. Spins objects, especially round ones. Can become totally absorbed in this activity and distressed if interrupted.
11. Resists change in routine. Change in the smallest thing may result in acute, excessive or seemingly illogical anxiety, e.g. child rejects new or all but a few foods.
12. Strong resistance to any learning, either new behaviour or new skills.
13. Lack of fear about realistic dangers, e.g.. may play with fire, climb dangerous heights, run into busy road or into the sea.

For the diagnosis of Infantile Autism or Autistic symptoms to be considered, a child should have at least seven of these thirteen manifestations.
To swing the pole to the other side, a huge number of autistic children have been found to have high intelligence in certain fields. They are not victims of brain damage, and therefore if this intelligence can be reached, they offer great potential as human beings. Many of them take con-siderable pleasure in music, displaying at times perfect pitch, while others are brilliant at mathe-matics. Often they show incredible accuracy in memorizing long poems and stories, numbers and dates. Their sense of direction is highly developed, their dexterity with manual puzzles surprising, their energy boundless.
And they are almost always beautiful children.
What a challenge they present.

What causes Autism?
If this were know we would be half-way to the cure. These children are a jig-saw with missing pieces. It is in the allocation of causes that experts all over the world disagree, strongly. One theory is that parental influence has some bearing, and it seems that this has been based on the findings that large number of the parents of autistic children are inclined to be intellectual and somewhat cold by nature. But two factors offer an opposing view: one, that the symptoms of autism are notable generally in the first eighteen months of a child’s life before it has been greatly influenced y it parents; and two, that since infantile autism is much commoner in boys (sex ratio is 4 to 1 *  Maudsley study) the question of parental influence as a major cause is open.
A growing number of specialists feel that the cause might lie rather in the child’s chemistry: that some defect here is affecting his nervous system.
It can only be said at the moment, however, that the evidence produced by researchers on the subject has no conclusive findings one way of the other.
How are we dealing with it?
No parent of an autistic child would be content to sit and wait for the cure, but would feel a daily urgency to do something about the situation, to treat or train, to grab at any straw that offered hope. Understandably, it is the parents of autistic children who have been prime movers, all over the world, in forming organisations, setting up training centres, pressing for and following research, demanding government aid.
One of the major realisations of the 1967 Conference in South Australia was the need for early diagnosis and treatment.
The first step in treatment is to establish a positive relationship, preferably between the child and his mother. Properly handled this will lead on to further development and relationships with other people. In time, he will be ready to attend a centre tailored to his needs where he will receive further training designed to bring him to the stage of being able to attend a normal school. Here it is as well to mention two things: that the degree of success will depend to a certain extent on the degree of autism, and that the size of the class into which he would go at normal school would need to be no larger than twenty.
All over the world, notably in Great Britian, USA and France, autism is being dealt with in two ways: research to determine its causes and to find a means of cure; and maintaining and improving the training of these children. The research and the training need to progress side by side if we are to gain permanent benefit from the work being done.
Providing facilities for the training of autistic children (it is considered there could be 2,000 in Australia (in 1969 when this was written) is no mean task for a country with its government overloaded with the problem of financing the education of normal children.
Private enterprise and the people must answer the call, and it is hoped that we are healthy enough in attitude to recognise our responsibilities for t he less fortunate  ones in our community.
Australia has a position of some distinction in the world of medical research, and perhaps in the great scheme of things it is to fall to the task of the Aus-tralians to cross the frontier.
We must proceed. 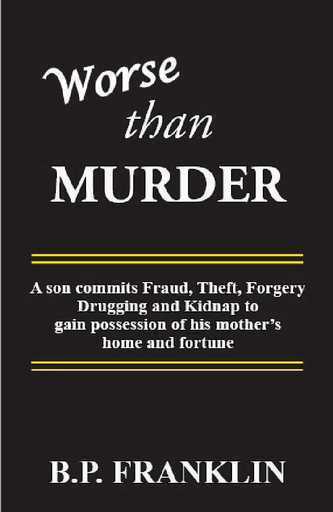 SYNOPSIS Michael Middleton commits fraud, theft, forgery, drugging and kidnap to gain possession of his mother's home and considerable wealth. His mother Marion Middleton is helpless, forced under heavy medication locked in a high security establishment and might remain there until her death save for the determination of her friend Patti Wallace to get her out and prove Marion's sanity and expose the evil manipulation by her son.. Theme: Abuse of Elderly Marion Middleton, 79, m. Harold, died five years ago. Son Michael 55 m. Jan 52. son James 18, d. Kate 16 Friend of Marion, Patti Wallace 77, m. Geoff, died five... 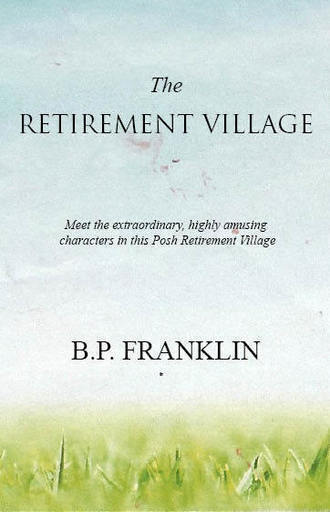 Inside the upmarket town houses of the retirement village there are extraordinary characters: a multi-personality major, a broken scientist who has lost everything but still believes the Nigerian money will arrive, a woman who is obsessive-compulsive, an arrogant and dominating wealthy woman who is out to control the village; a writer who has convinced everyone he is writing a great novel, a congenial couple who can’t wait to get out of the place, a retired country accountant whose cupboards are stacked with irresistible bargains; the Italian couple who break all the rules, an eighty-three-year-old woman who has increasing signs of... 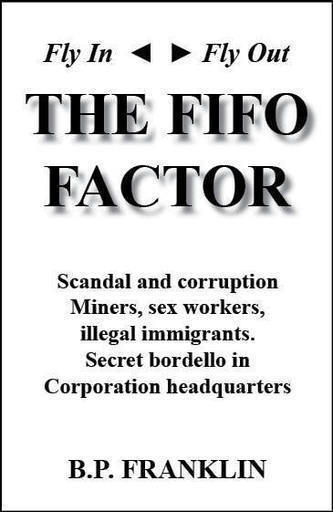 ore than company secrets: if the media found out what goes on iThe high security of the world's biggest mining corporation, Cybele, in far west Queensland, guards mnside, the company and all associated with it would explode. The mining company employs a Fly-in Fly-out workforce. Fly-in Fly-out prostitutes follow them. Cybele has its own exclusive Fly-in Fly-out prostitute in Brisbane actress, Virginia. Posing as a representative of a technical supply company, she takes on the job of acting out the sexual fantasies of some of the world's most powerful men, in a secret bordello set within the corporate quarters. Investigative journalist, man...