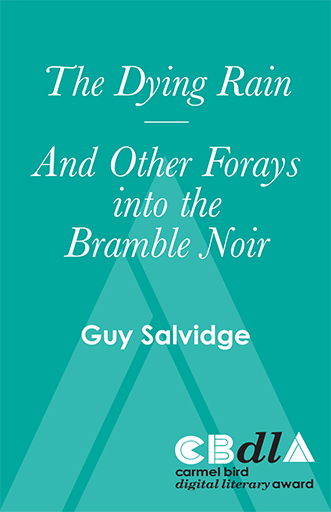 The Dying Rain and Other Forays into the Bramble Noir

Meet Tyler Bramble, the grimy future’s answer to Philip Marlowe. Armed with what he considers to be a razor-sharp wit and what his supervisor considers to be a troubling history vis-a-vis illicit pharmaceuticals, Tyler takes on drug dealers, dodgy doctors and extortioners, and it’s all in the name of the long suffering Victorian taxpayer. These Bramble Noirs—wise cracking, off-beat, occasionally zany tales in a post-apocalyptic Melbourne—reboot Raymond Chandler for the twenty-first century, critiquing toxic masculinity and poking fun at the tired tropes of the tawdry PI genre along the way. At least that's what it says on the label.

It wasn’t far to Finnegan’s, nothing in Kilgore being out of shuffling distance. It was early so there weren’t many customers, but it was still too late to bump into Finnegan on his lonesome. Besides, I hadn’t eaten. The front of Finnegan’s was a dirt car park with rock pillars and the restaurant was open air. The place was loaded with nautical kitsch: antique lifesaving rings; wooden oars; replica fish; and even a battered fishing trawler next to the smouldering log fire. There was more of the same in the kitchen area, but my eyes locked in on the chef, aproned, standing behind his grill. Sixtyish, weather-worn and sporting a black ponytail, Finnegan barely glanced up from his work long enough to ascertain that I was a lone diner, leaving his assistant to take my order at the till.

‘Red emperor and chips,’ I said, reading from a chalk board.

The assistant, a thin-faced twenty-something, rang up my order, bracelets and rings pattering on the till’s plastic rim. I paid and stole a glance at her ankles as she swished away, but I saw nothing through the billowing layers of her dress.

‘See something you like the look of, cobber?’ Finnegan said, scraping the hotplate.

‘Maybe,’ I said, glancing over my shoulder. More diners were coming up the stone steps. ‘You still get some decent fish up this way, then?’

Finnegan grinned at me. His mouth was full of gold dentures and black teeth. ‘It won’t kill you,’ he said, flipping the fish over. ‘Not immediately,’ he added.

He looked up. ‘Providing you can spare a drop for the chef.’

‘Dunny’s around there,’ he said. ‘Past the container. Grub’s up in five. I’ve got a feeling it’s gonna be a slow night.’

Finnegan obviously lived on site as there was household junk scattered everywhere. The wind picked up sand, stinging me, and everything rattled. The sea container was rusted and painted with Chinese characters, and it was locked up. I found the toilet and saw nothing enlightening there, no girlish effects or other items I might regard as clues.

‘Number four,’ Finnegan bellowed as I rounded the corner. I poured him a measure of rum and took my plate loaded with fish, chips and rice from the counter.

‘Is it safe?’ he asked, sniffing at the clear liquid.

‘It won’t kill you,’ I said, hard at work with the pepper grinder. ‘Not immediately.’

Finnegan knocked it down and staggered back a step. ‘Drunk me fuck,’ he said.

I took my dinner and sat down near the fire. No one sat near me. There were a few couples, one with a clutch of children. The kids entertained themselves by tearing around and standing on buckets in front of the elderly coin-op arcade game, long since powered down forever. The food sat stolidly in my gut, as though my innards had forgotten the art of digestion. Finnegan’s assistant eventually came over to collect my plate. This time, in the flickering light, I spied the thing I was looking for in the place I expected to find it.

Her arms loaded with dishes, she considered me. ‘Shoot.’

‘Where’d you get that tattoo?’

The young woman opened her mouth to speak but no words came. She shut her mouth.

‘I’ll have a quick word with the boss.’ She stole away without looking back at me. Through the mesh separating the dining area from the kitchen, I saw the two of them in congress and I knew that my message had been delivered. I drank another glass of the rough stuff and waited for the other patrons to leave. Finnegan and his assistant went about their closing routine, the latter occasionally glancing in my direction. When there was nothing left to clean, she came back to where I sat before the cooling ashes.

‘You don’t know what you’re getting yourself into.’

The woman shook her head and backed away. She took her things from the kitchen and hurried down the steps. I walked over to the counter, where Finnegan was waiting. He didn’t pretend to be surprised that I was still there.

‘But you still drink it.’

‘They don’t age it as well as they used to.’

‘I think we’re reading from the same song sheet. Let’s talk terms. A hundred up-front and another hundred when you’re done. And the key word here is gentle.’

I opened my wallet and passed him the money, which Finnegan put in the till before reaching beneath the counter and retrieving a key. ‘She’s in the container. Quiet as a mouse, she is.’

I went around to the sea container, through a swirl of sand and the cacophony of banging objects. I turned the key in the heavy padlock and slid off the chain. The lever opened easily, revealing a cramped room with a dirty bed and a frightened child huddled in the far corner. There was a tiny lamp on an upturned bucket and the floor was littered with debris. Though I wanted to reassure the girl, I couldn’t even begin to set foot inside.

‘Quick, run and hide,’ I said and went back around to the front, where Finnegan still stood beneath a single oil bulb. I held the revolver inside my coat.

‘Lost your nerve?’ he said. ‘Don’t think you’re getting a refund.’

‘I’ve been having suicidal thoughts just recently,’ I said. ‘One minute I’m up, the next down. This is a down moment.’

I opened my coat and showed him the .22.

Guy Salvidge’s intermittently award-winning fiction has squirrelled its way into such esteemed publications as The Great Unknown, Westerly: New Creative, Award-Winning Australian Writing and the forthcoming Stories of Perth. When he’s not writing Bramble Noirs, he moonlights as an English teacher in rustic, rural Western Australia.