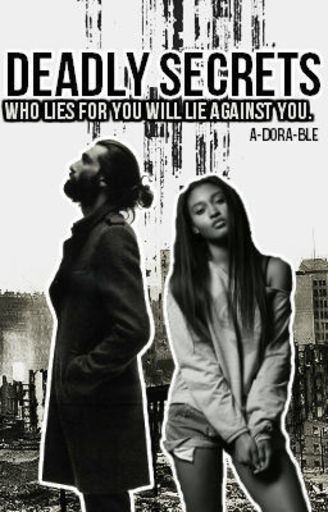 After the suspicious death of her parents, it felt like Zara's life was torn apart. Being orphaned as a child meant that she was immediately handed over to social services where she was dragged from foster home to foster home; each form of abuse was worse than the last. Every single day was lived in fear. Until an estranged grandfather one day appeared out of nowhere and took her under his wing, despite barely being able to take care of himself. Resorting to thievery in order to avoid drowning in poverty, life seemed to slowly pick itself up again for Zara, until the most unexpected person stumbled into it and spiralled it yet again out of...

28 Reads
0 Favorites
Get the App

"Yo Zara! Haul ass, we're all waiting on you," Orion hollered, yanking open the rear door of a battered Chevrolet Sedan. He chucked an empty duffle bag onto the back seat then slammed the door shut, rocking the car. Orion then jogged around the back of the car, stopping at the passenger side to bang a fist against the roof, his patience with his friend's sluggishness wearing thin. "If you're not here in three seconds, we're going to leave without you!"

Orion snorted and spat onto the road, then he reached into the inside pocket of his leather jacket to pull out his packet of cigarettes. He popped one into his mouth and glared at the empty sidewalk; it had been more than three seconds and, surprisingly, his friend still hadn't magically appeared at his command.

Inside the adjacent apartment building, Zara was hopping around the lobby, attempting to squeeze her foot into her boot. After she had painstakingly succeeded, she stamped her foot and wiggled her toes. "I'm coming, Jesus," she grumbled, half-limping, half-jogging her way to the entrance, a backpack around her shoulders and a crowbar in her hand. She threw herself against the heavy metallic door and recoiled when she breathed in a mouthful of the frigid autumnal air.

"I'd appreciate if you had a little more respect for my car," Saffron complained, unable to hide his disgust when Orion ignored him and lit his cigarette. "Also, you shouldn-" He held his tongue when he saw Zara stumbling down the stairs, and instead of continuing to berate Orion, he put the key into the ignition. The car briefly chortled, then the engine began to purr as it warmed up.

"I'm really sorry guys," Zara said, pulling the car door open and slipping into the vehicle. "I couldn't find this," she waved the crowbar around.

"Sure took you a while though," Saffron muttered, shifting the gear in reverse.

"Yeah, I know. I said I'm sorry." Zara closed the door just as Saffron pulled out of the parking spot, and she took her backpack off and absentmindedly shoved it against Aurora.

"Hey! Watch it," She whined, shoving it back towards Zara.

"Well maybe if you moved your-"

"Why should I move? I wasn't the one that took twenty years to get her ass into the car!"

"That doesn't give you the right to have your fungus-infested feet against me!"

"Shut up! Both of you!" Saffron slammed both hands against the steering wheel, earning himself a sideways glance from Orion. "What is this, first grade? Grow the hell up!"

"Yeah, okay Orion." Zara rolled her eyes and rested her cheek against the window.

The rest of the car ride was relatively productive as instead of bickering, as Saffron said, like first-graders, they had discussed the plans for the night.

Whilst the other three chattered away, Zara kept relatively quiet as she gazed out of the window. They had left the big, bustling city of New York behind them and were now entering the suburbs of Ditmas Park, Brooklyn. The car was no longer encompassed by the blaring of horns and the foul stench of exhaust fumes, the road wasn't flanked by dilapidated brick buildings, and the sidewalks weren't occupied by dejected-looking pedestrians.

Although it was nightfall, with the aid of the street lamps Zara could make out the small one- and two-family homes, timidly hiding behind high-rising bushes and well-tended gardens, like a toddler behind its mother.

Saffron's voice lifted her out of her thoughts.

"I've monitored the area for quite some time now, and I've been taking notes. The neighbourhood is relatively well-off. I wouldn't say that the residents are rich, but they don't exactly live in shacks either." After he veered into a different lane, he reached into a compartment next to his seat and pulled out a notepad, handing it to Orion, never taking his eyes off the road. "Be a bro and read the stuff out for me. I don't remember all the details, and I can't exactly read them out as I'm driving."

"Oh give it here." Aurora reached out and snatched the notepad from Orion, "It physically pains me to hear you read." She pulled out her iPhone and flicked the flashlight on, illuminating the ambience. "It's called a brain. You should use it some time."

"Weak security measures. Properties are mostly surrounded by trees and hedges, and although they possibly have burglar alarms, these are often left inactivated or ignored-How do you know this?"

"Oooooh, yes." Saffron, braked at a stoplight and passed a hand through his hair, "Think about it. These people are members of the upper-middle class. Everyone around them is at the same social status so they would have no reason to believe that someone would try and rob their house."

"Ironically, that's what we are doing now," Zara piped up.

"I know, I know. But there's always a first time for everything right? I'm even willing to be that these people keep their doors unlocked. Their cherries are ours for the picking."

After a few more left and right turns, Saffron slowed and pulled up at the side of an empty road. He switched the car off and after a quick glance in the rearview mirror, he unbuckled his seatbelt and turned towards the others, a solemn look on his face. "Alright lads, this is how it's going to go down. See that white house over there? The one that's three houses away from the one we're parked in front of."

Everyone craned forwards in order to catch a glimpse of the target.

"You know why I picked that one?" Saffron whispered.

Everyone shook their heads.

"Because the owners are probably deep asleep by now..." he checked his watch.

"No teenagers in the house, just a childless middle age coup-"

"Sorry but isn't it a little shady that we're are like the only car parked on the street?" Aurora asked, sweeping her jet-black hair over a shoulder.

Saffron shot her a look.

"Don't interrupt me again. And no, it's not shady, because you three are going to be the ones going in there, while I'll be the 'getaway driver.' As soon as you guys get out of the car, I'm out."

"No dogs or anything funny right? We were this close to getting caught last time."

"I-I don't remember. I'm not sure, but I doubt it. Anyways, gear up, we've already spent more time here than we should have."

Zipping and unzipping ensued as the four of them began to change their clothes. Zara double-knotted her Docs while Aurora tied her hair into a tight ponytail and Orion slipped on his leather gloves.

They all finished by slipping black balaclavas over their heads.

They were now virtually invisible.

"Good luck out there and remember: we're a team. If something happens to anyone of you, I'll be damned if we don't all end up in the hell-house together."

Orion and Aurora were the first ones to get out of the car, but as Zara shifted her way towards the door, Saffron reached out and grabbed her forearm. She turned her head towards him, an inquisitive look in her eyes. "Take care of them, okay?" Saffron said, his voice low.

They maintained eye-contact for a split-second.

Zara blinked and looked away, nodding in understanding.

Zara nodded again, more as a reflex than anything, and stepped out of the car, grabbing her backpack on her way out. She made sure to shut the door behind her with extreme tactfulness-but after two swift knocks on the window, Saffron was off.

And so were they.