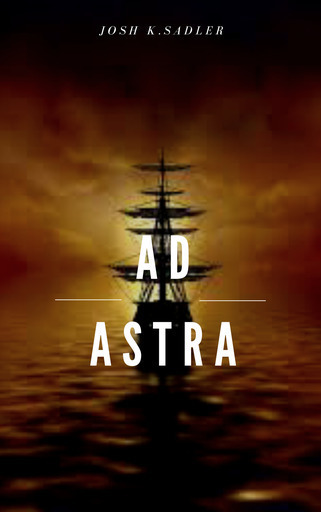 An introduction to a short story following the adventures of the Continental Republic Ship Ad Astra. The Continental republic as been locked in a brutal 30 year war with the Great Empire, a ruthless authoritarian dictatorship. Commander James Lark will question his allegiances in a personal journey that will shine light upon the true story of his fathers death. The hope for peace and the fate of both kingdoms will rest ultimately in the hands of our young Commander.

22 Reads
0 Favorites
Get the App

The wind was beating hard at their back. Weather perfectly complementary to the pursuit of the enemy ship.

'Closing sir, 4 miles out. I estimate 3 hours until intercept at our present speed.' The First Officer stepped back from the Captain realising that, in his eagerness, he may have gotten uncomfortably close. James Lark was young, no older than 22. He had joined the service as a midshipmen at just 13. This was his first voyage as second in command. Commander James Lark of His Imperial Majesties Ship Merciless.

'Thank you, Commander. Have the gun teams standing ready within the hour. They out gun us and they out armour us. All we have is our speed, and thats not much use in a gun fight. When the opportunity arises, we will have one chance to seize it.'

Captain Hidebreaker had earned his name, through years of ruthless leadership inside the service. He was old. With at least 60 years behind him. The last 20 of those serving in His Imperial Majesties Navy as Captain of the H.I.M.S Merciless. A 30 gun frigate commissioned to hunt ships that bore the colours of the United Continental Republic. The two kingdoms had been at warring odds since the republics rebellious split from the Great Empire 30 years prior.

For 4 days the Merciless had been in pursuit of the Republic ship. Imperial intelligence had intercepted communications that suggested there would be a Republic ship making the crossing from the continent to the Southern Islands to drop medical supplies. They were quite correct.

'Sir!' A voice came down sharply from the crows nest. The Captain and other bridge officers raised their heads to meet it. 'The enemy ship is slowing. Its turning hard to starboard! Guns are out, Sir!'

The Captain took a sharp intake of breath. He looked to Commander Lark.

'They know we'll catch them. They're turning to fight.' He stopped, considered himself for a moment. 'It seems we make our stand here, Mr Lark.' He said quite calmly. The Captain once again found himself looking at the young First Officer, a strange smile gracing the corner of his mouth. A smile that said he had been waiting for this moment. His face dropped, he turned to face his crew who were still on the deck awaiting their instructions. Hidebreaker said in a low tone audible only to his First Officer: 'General quarters, Mr Lark.'

'General quarters!' Screamed the young officer. 'Gun teams stand ready!' The stillness was broken. The crew knew their place and they quickly assumed it. The ship was busy with an efficient energy. Guns being rolled out, men arming themselves and taking their place. The quarter deck however, was still. The captain stood, unmoving and upright with his hands behind his back. James Looked far less confident. He had seen combat only once before. He was only 16 and a lieutenant. That battle killed his Father. He could feel the nerves and he could feel the fear. He was however steadfast in his determination to not let such an emotion show. He was not willing to show his fear to the crew, nor was he willing to show it to the Captain. Above all, he was certainly not willing to show his fear to himself.

'Hard to starboard, helm. They have challenged us, we shall meet that challenge.' Said the Captain asserting the same quiet confidence with which he had spoken to Lark.

'It's the Wanderer, Captain' said the Commander. Both ships were now parallel with each other. There was not 100 meters between them. The Captain of the Merciless watched the Captain of the Wanderer as he in turn watched him. The Wanderer's Captain raised his left arm. He dropped it quickly, signalling the first cannon Volley.

'Brace! Brace!' The order cut through the screams of  the frantic crew. 'Gunners, standby!' The tearing of the enemy cannons had begun. The ammunition shredded the side of the ship, reducing the upper port side to kindling. The gunners reacted to the order, either because they had heard it or because it was the next instinctive step in a sea battle. Only 12 guns teams remained on the port side following the first enemy volley. A discernible reduction from the boastful 30 gun array the Merciless before maintained.

'Fire!' Screamed the First officer; disjointed and disorderly, the cannons blasted. They ripped through the middle of the top deck and the bottom of the main mast. The screaming could be heard from both ships now. Limbless men cried upon the deck, bloodied and shell shocked, other men came to their aid. In vain, of course. 'Reload, reload the guns...' before the Captain could even finish his order, the second enemy volley hit the ship. It tore across the quarter deck, taking splintered wood, blood and bone with it. Leaving death, and an un-commanded ship, unprepared for chaos, in its wake. The Captain was hit. He lay still on what was left of the deck. Lark ran towards him. The Merciless cannons fired again. The Captain was not dead, though he was close to it. Lark cradled  the Captain's head. His eyes were open but seemed empty, void of life. He spluttered blood upon his chest. He was hit on his lower left side, the shot had removed his left leg. With what little energy remained, he turned to look at the Commander.

'She's your ship now, Mr Lark.' He drew in a long deep breath 'Good luck.' With that, he fell limp in the young Commanders arms.

The ship, broken and bleeding, was his.