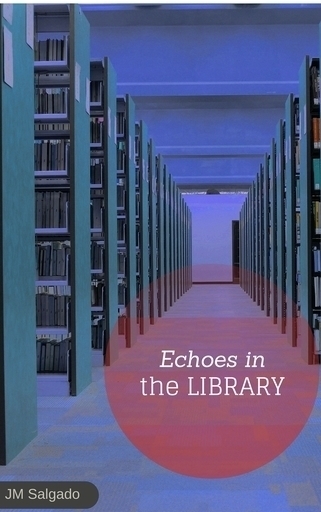 Echoes in the Library

A place of solitude is always different for everyone, but there are always stories to share in those places. Here is a place for my once lonely memory

People usually fill the days with tasks, appointments, and reminders of responsibilities to accomplish. One day leads to the next. There seems to be an endless note for today and tomorrow. While there are things from the past that are slowly being forgotten, or are ultimately erased. Everyone tries to find some solitude to reflect and refresh once the days seem unbearable to continue. The thoughts linger, however, and stories are told.

In my personal experience, books serve as my companion whenever I search for solitude. The libraries are places that bring magical escapes. Though it is difficult to find one in my own town, I exchanged those moments with a bookstore nearby. Still, there are dreams and questions that stay longer in my mind. What if the place of safety brings more pain and show old scars? Here are stories that were created with the love of words, visions of the past, and hope for answers.

All of the stories in this collection are fictional. As a writer, inspiration comes from almost anyone or anything around me, so I do not wish to harm or hurt anyone who feels the same towards the characters or the stories. I hope that this could be a companion to explore our emotions.

Three-thirty in the afternoon, the whole small town of Shale grew quiet. The cool, strong winds came and Alex looked out of the window and saw it all. The sky was blue with the peaceful shades of soft white clouds. The sun was hiding behind them, taking a break. Alex knew better and closed her eyes as she inhaled all of it. The sweet smell of the fallen leaves from the mango tree nearby. There was a moist forming on her cheeks when the wind touched her face. This made her smile.

As she continued to get everything all at once, her hair tossed over her eyes, then a rusty smell of rotting metal followed. Her eyebrows started to curve. She didn't like the smell. Still, she opened her arms wide open, eyes closed, and putting her arms slowly across her chest for an embrace.

A tear fell and Alex felt the warmth slowly moving from the corner of her eyes to the peak of her cheek, then down to the floor. The air didn't feel so cool anymore. She lost the smell of the leaves and had enough foul rusty smell. Only the tear was left to her senses.

She was starting to burn all over. The tears kept falling. Her arms became like twenty pounds heavier, her hands trembled. It didn't end there.

The feeling crawled from her head, snaking down her neck and covered both her shoulders, her arms followed. Then the heat got close to her heart. It should have had hurt, but it didn't. It was only a tingling second before it left and danced through her belly. it weakened her legs and bent her knees.

When she opened her eyes, she was on the floor. Her feet were wet. The tears continued to flow straight to the small gaps between her toes as they searched for freedom from the top of her feet. As she looked up the window, the sun had set and the air was cold.

Time is fast. It does not wait.

She stood but stumbled a little on her way up. She wiped the tears away and checked her clothes.

Alex closed the windows with some difficulty. Her fingers were fighting over the numbness. She had to wait for a while. When the air was finally kept outside, she faced the room. No lights. But she knew the way. She walked past the old wooden table on the right and moved gracefully over to the bookcase.

She raised her hands to let her fingers touch the books. She touched and counted one by one. Then she knew she  would be at the corner of the room where the switch was. The light was on and the memory was gone, but the rusty smell was still there, sheltered by the books and even behind the bookcases.

The sun was shining brightly when Joanna came to the library. It was already Friday and she had postponed her visit for as long as possible because she hated the idea of spending the whole day working on her final paper and thesis. She lazily walked up the slope to the center of the stairs that stretched up to the front door. She gazed to the tall trees surrounding the library and did not mind the quietness of the day.

As usual, Joanna slowly pushed the glass door and put half her face in just to check on the place first. She only saw the old guard who waved happily to her. She didn't respond instead she gave out a long sigh. The university library wasn't as grand as the private ones around their area, but it had enough resources for Joanna to work on.

She playfully walked down the steps to the basement. Her shoes were making a loud sound, echoing across the hall. But she didn't mind because she knew that there weren't many people there. It was an early Friday morning, and students were excited to go home. Then the basement was the perfect place to focus on her work because not so many people went there. It was a place that kept most of the thesis, dissertations, and journal materials which students didn't find that interesting to read.

As she walked past the stairs, she opened the wooden door to her right and entered the dim-lighted room of the thesis section. Dozens of tall bookshelves covered the whole room. There was no librarian or attendant here. They get books checked out on the first floor. Joanna liked the place.

Even though the whole place smelled like wet and rotting papers, she liked it. She even loved it because it brought back memories. Reminders of her own room in the city and old manuscripts of her grandmother resting on different tables. She was home here. Joanna held her right hand high and reached for the books, but didn't get any. She simply let her fingers feel the spine of each manuscript while humming softly in between. She let her senses guide her until she came to the end of the basement at the corner of the last two shelves.

Joanna never liked working on a table. She did better on the floor so she could touch the cold yet smooth tiled floor, and placed her books all over the floor. It was a grand canvas for her report. This is the sweet spot that she liked in doing her draft. It was never the research or the study, but the comfort of the floor and space. It was eight in the morning when she started writing. It took her around five to six hours before she felt her stomach grumble.

She put down her books and started walking to the door when the lights turned off. She was startled, but she kept calm and went closer to the bookshelf on her right. She raised her hand to touch the books and her fingers moved slowly as she walked. Then she stopped. There was a book missing and her fingers were left hanging on the air.

No one's here except me.

She shrugged the idea off her mind and continued walking. She was so familiar with the basement that she knew the number of footsteps that would take her to the door. She counted until twenty then she reached her hand forward to touch the old wooden door.

It was not there.

Joanna shivered at the spot. Then she felt the hair all over her body rose from the sudden cold. Her hand was hanging on air and somehow small spots of sweat started forming on her forehead, then her arms, until it came to her half opened palm.

A thunderous sound echoed in the room. One of the shelves fell, maybe, or even two.

This brought Joanna back to life. She got her hand moving again and rushed back to her spot. The lights were moving, she saw them dancing at her side.

Lights. They're only playing tricks on my mind.

She got her bag and searched hard for something...anything. Until her eyes shut wide open.

She couldn't seem to think properly anymore so she ran round and round, finding an exit or a breath of air. It took almost an hour before she finally grew tired and just fell on the floor, crying.

Small drops of tears came rushing down her cheeks. She cupped her face with both hands and filled them with raw wetness. She couldn't remember which came first, the crying or breathing. Both happened without rest, sucking all of her remaining energy. Then the lights went off without her knowing. All she saw was black covering her sight.

Joanna opened her eyes and dropped her hands to her side. This time, she was too close to the floor because of her crying. She couldn't pick herself up to even kneel. She felt her eyes heavy and swollen so she tried to touch them to relax. At the same time, a warm air came out from a whisper to her left ear.

Your eyes look pretty. Can I borrow them for a while?

Tak. Tak. Tak. as the old man's shoes came, along with the cart's screeching wheels.

He got a long mop and started cleaning the red marks on the floor, thinking of the headline just a few hours ago.

He continued with this mopping as he whistles a soft, slow tune with a crooked smile on his lips as he finished the last note. 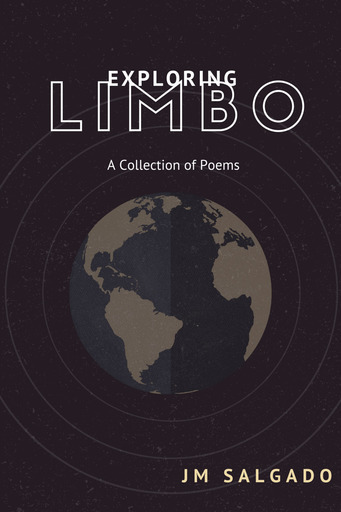 There are moments of uncertainty. Some of these works may have come to live in limbo. 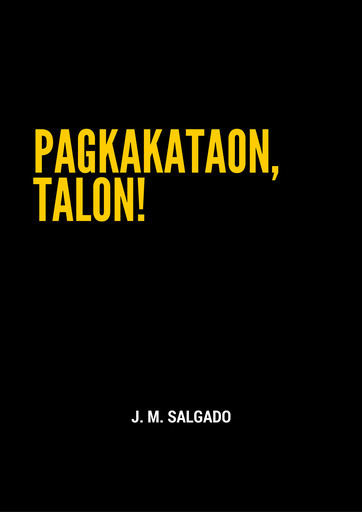 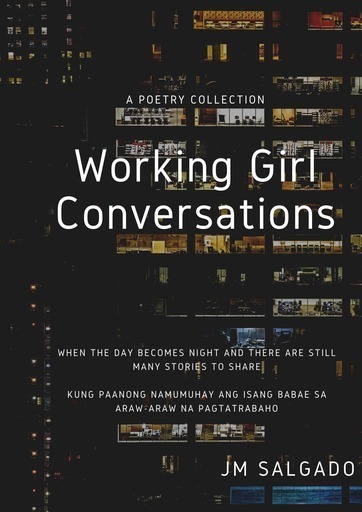 When the day becomes night and there are still many stories to share. Kung paano namumuhay ang isang babae sa araw-ara na pagtatrabaho.