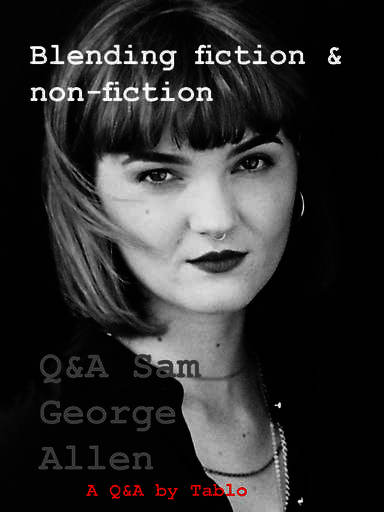 A Q&A from Spineless Wonders' online bookclub, with Sam George-Allen about blending fiction and non-fiction. In her book 'I Put a Spell on You', Sam explores how certain practices of women today mirror the work of their spell-casting ancestors. Part narrative, part long-form essay, George-Allen deftly manages this multi-genre piece of experimental writing.

Sam George-Allen is a Brisbane-based writer and musician. Her essays and cultural criticism have been published in Kill Your Darlings, Overland, the Griffith Reviewand the Lifted Brow. A collection of her essays and fiction, I Put A Spell On You, was published by Spineless Wonders in 2014. Her first IRL book, Witches: What women do together, is due out in 2019 through Penguin Random House.

This Q&A with Sam is about I Put a Spell On You. It's an updated version of a discussion which took place on Spineless Wonders’ online bookclub. In I Put a Spell On You, Sam explores how certain practices of women today mirror the work of their spell-casting ancestors. Part narrative, part long-form essay, George-Allen deftly manages this multi-genre piece of experimental writing.

These questions and comments were from a range of writers and readers – specific names have not been included here.

What came first? Did the essay inspire the short stories or vice versa? And what made you then intersperse the fiction with non-fiction?

I wrote the short stories first. They didn't need a whole bunch of research – they were a reflection of my personal witch craze. The first piece of fiction was written in a weird fit of creativity, and then the rest of the story started to fall into place in my head

It is a very enjoyable moment of discovery for readers when the stories come together as one. Tell us more about that process. Was it that you couldn’t tell the story without these essays?

I was hoping to create that impact on the reader! As for the hybrid fiction/non-fiction structure, it was more the other way around. I wanted to write non-fiction about witchcraft etc, but I thought the ‘story’ wasn't complete without the short fiction along with it. I think, especially with something as slippery/intangible as witchcraft, it needed something more than just analysis to really address the subject.

This collection honours women’s work (midwifery, for instance) and women’s history, generally. Do you genuinely believe in witches or are they a kind of metaphor through which you can write about feminism?

Well, witches are real people – magic, on the other hand...magic is a lot of things to a lot of people and I am in no position to rule it out after all the reading/interviewing I ended up doing. While witchcraft is definitely an extended metaphor about feminism, I also do kind of think that some people use magic for real, because if I learned one thing from researching witchcraft, it’s that it’s a deep, strange, unknowable well.

The collection is filled with sultry, deeply-seductive and sensory writing. Why did you adopt this style of writing?

I hadn't really thought explicitly about the sensuality/seductive nature of the short stories, but when I was writing them I had a strong sense of the Queensland gothic setting and I think that guided the style quite a lot. In the stories themselves I tried to keep the place ambiguous, but for me I was very much writing Far North Queensland, which is you know, wet and hot and sticky, adolescent.

On the topic of midwifery, how much research did you need to do on this and where did the idea come from for this?

One of my friends is a student midwife. I haven't known her for very long but we are pretty close and I was just so fascinated by this profession that straddled the medical and the personal so closely. Midwives are incredibly important just for being stewards of women and women's wellbeing. They're so much more about protecting women than just bringing babies into the world.

You write so well about makeup in this collection and about what has in common with witchcraft. How women bound over the rituals of make-up and about how so many men think they're being "tricked" by women who make up their faces. Can you talk about this?

I did keep thinking about what makes a woman a witch, and it's definitely got something to do with ritual activity in groups – women's business. I included my own makeup ritual in the essay which made me feel quite naked, which is sort of appropriate. I have so many thoughts and feelings about makeup and they are all very contradictory so I'm glad it ended up being something moderately intelligible.

And turning to characterisation in this collection, you really have some memorable characters. Can you tell us for instance, about the trumpet-playing mother who just got on with her own thing?

I’ve never written much about motherhood and I'm not at all experienced in it but I really liked the idea of a mum who wasn't particularly present (maybe not particularly keen on being a mum) but who also wasn't "bad".

You add another layer to the characters and their relationship through the presence of magic in these stories. For instance, was it that a particular spell had gone a little wrong and this had cost the daughters their mother? Is it that the mother doesn't like what her daughters with regard to their teacher?  Or were they in fact keeping her in this state with spells? Or was she simply following her own path? Lots of enjoyable speculation here!

I can't even tell you how thrilled I am about that kind of speculation! That was really the kind of ambiguity I was trying to conjure.