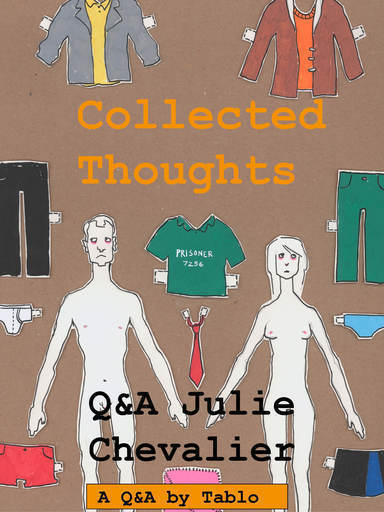 An insight into writing short stories from Julie Chevalier...She speaks about ordering the stories in her collection Permission to Lie, the importance of titles and choosing a story’s style. Permission to Lie is a brilliant blend of humour, snappy style, insight and compassion. The stories, ranging from stand-alone vignettes, to dramatic monologue and linked narratives, are set in places as diverse as a nudist colony, a jail, the corporate world and McCarthy era, America.

A collection of twenty stories set in Australia and America, Permission to Lie is a brilliant blend of humour, snappy style, insight and compassion. The stories, ranging from stand-alone vignettes, to dramatic monologue and linked narratives, are set in places as diverse as a nudist colony, a jail, the corporate world and the McCarthy era, America.

Julie Chevalier grew up in New Jersey and now lives in Sydney. She is a former prisoner educator, home school officer, poet, creative writing teacher and writer of fiction. Her third book, Darger: his girls, won the Alec Bolton Prize and was short-listed for the Western Australian Premier’s Poetry Prize. Her short fiction collection is Permission To Lie (Spineless Wonders, 2011).

Thank you Julie for sharing such interesting aspects of your writing/organising processes.
I like your 'self-indulgent writer' label, and that you write 'what intrigues you'.
So many writers are running themselves ragged trying to fit all the so-called 'rules' of writing. All too often it seems the baby called individual 'creativity' is thrown out with the bathwater.
Your style and advice feel so refreshing. Again, thank you.
Christine

'What unites the stories is their eccentricity and diversity and that I wrote them.'

Can you tell us about how you decided to group the stories in your collection, Permission To Lie?

The first two stories focus on an urbane trio, their work and the financial agreements that cantilever their sophisticated relationship. The rest of the stories in that section are also about relationships in urban work settings.

The next seven stories are a discontinuous narrative set in Long Bay, a complex of correctional centres in Sydney with prison educator, Chalkie as the central unifying character.

The last section has less unity. Wearing clothes is not compulsory and Pentimento with fog are linked by having the same characters. The four final stories are set in the United States rather than in Australia.

I hate to think about arranging a collection. The cliché is to put your best at the beginning and the end and hide the rest in the middle. This is what everyone does, isn't it? More on this later.

Maybe this is the place to say that I consider myself to be a self indulgent writer of weird stories. I rarely pressure myself to write. I write what intrigues me. That creates an eagerness to write. I don't write in tidy sequences that lead the reader seamlessly from one to the next. I am better on contrast and experimenting than predictability and consistency!

I am acutely aware of this now because I am arranging short fiction for my next collection. The writing is getting shorter and flashier, but unity? I struggle with unity. What unites the stories is their eccentricity and diversity and that I wrote them.

And how did you decide to arrange the stories in the order you did?

Probably I wrote the titles on 3x5 cards and rearranged them. That is what I am attempting to do now. I think I started off grouping stories with the same characters or themes. Then, as I said earlier, I think I headed and tailed what I felt confident about and hid the ones I was least confident about. But, I must not remember accurately because the paper evidence does not support this.

Did you consider naming these story groups?

Only briefly. I had considered naming sections when arranging my poetry collection, Linen Tough as History, but Bronwyn Lea convinced me it was out of style in publishing at that time.

Instead each section in Permission to Lie begins with a line drawing introducing the new theme. That was the publisher’s idea. [The illustration, ‘Cavity Search’ by Paden Hunter, which introduces the jail section, is featured on the cover of this interview.]

I have trouble remembering abstract titles that can be associated with any book like Anything Can Happen.  I like titles I can grab. Visual titles are good, or concrete titles. Ones that are unforgettable because they identify a specific book: Olive Kitteridge, The Great Gatsby, Lincoln in the Bardo, A Manual for Cleaning Women.

Only months before my first book was published I focused on titles related to jails and jail slang but they seemed predictable or didn't apply to the collection as a whole. Then I trawled through the manuscript line by line looking at titles of stories and bits of sentences. I wrote a list of about twenty but nothing grabbed me.

The publisher, Bron Mehan sat opposite me at a kitchen table, her laptop open and eager, her iPhone pinging alerts. There might have been a gadget for broadcasting podcasts as well. Me with a pen and my list on a clipboard. We discussed New Yorker podcasts and Elizabeth Strout's incredible collection, Olive Kitteridge. I felt pressure to come up with something. I finished my coffee, bit into my toast, bit the bullet and slowly read my list aloud, crossing off each disappointment. When I read out the phrase, Permission to Lie, there was a mutual ah, eye contact and that was it.

The phrase Permission to Lie came from a female character insisting to herself that she would not give a man, a potential partner, permission to lie about his age. This time she wants openness and truth in a relationship, despite subtexts which aren't clear to her. The title applies to the jail stories as well. And another story is called Lies of Omission. Thank you, Bron Mehan, for patience, creativity and acuity.

How important is a collection title, do you think? For instance, is it more important to publishers and booksellers than to authors or readers?

The title Permission to Lie has given me immense pleasure. I can't state how important the title is to authors and readers creatively, intellectually and emotionally. It is super important to publishers and booksellers because they need a catchy, marketable package.

People are generally surprised when they hear the title, Permission to Lie, because they don't expect a joke. The second I give you permission to tell me a lie, we agree that it is no longer a lie. So the title creates a happy understanding, a collusion, between the author and the reader.

This year I unexpectedly (I typed funexpectedly which is not true) flew standby from Rome to Catania, seated next to an Alitalia employee. She told me that she had a lot of time on her hands living in another country for work and was using that time to write short stories. She asked me the title of my collection and it took a minute for her to translate it from English to Italian to English. She did a double take when she got the irony, grinned and grabbed her pen and Moleskine.

What is your all-time favourite short story collection title and why?

Where the God of Love Hangs Out by Amy Bloom is right up there. The God of Love, and we are not talking about some puerile putto-like archer here, is a tough dude who lives in the gritty world of mashed families. He hangs out in places that make me gasp. I love the warmth, vulnerability, diversity and shock especially in Bloom's stories about Lionel's family. Bloom's characters are flawed and loveable. Shove over Jonathan Franzen.

Some of my favourite short stories are written by Amy Bloom, George Saunders, Elizabeth Strout, Rick Moody and Lorrie Moore.

Your collection contains a range of short fiction styles from monologues to prose poems and even a line poem. Tell us about when in your writing process you usually decide what form the writing will take. Or is it different for each piece? Take us through some examples from Permission To Lie.

I have trouble in the beginning knowing what genre, person and tense will best suit a written piece. I rewrite almost everything dozens of times trying on the possibilities. When I started writing flash fiction as well as prose poetry the boundaries threatened to disappear. The prose poems and flash fiction fly from the fiction folder to the poetry folder and back again. Occasionally I write a short story and a poem about the same subject. Occasionally pieces morph into dramas written in parts.

An exception to this is Cherry Pie. I wrote it in one go at my kitchen table on a Saturday afternoon. Easy peasy. Quick. Usually I am still rewriting, trying another point of view, a year or years later.

Thank you Julie for sharing such interesting aspects of your writing/organising processes.
I like your 'self-indulgent writer' label, and that you write what intrigues you.
So many writers are running themselves ragged trying to fit all the so-called 'rules' of writing. All too often it seems the baby called individual 'creativity' is thrown out with the bathwater.
Your style and advice feel so refreshing. Again, thank you.
Christine