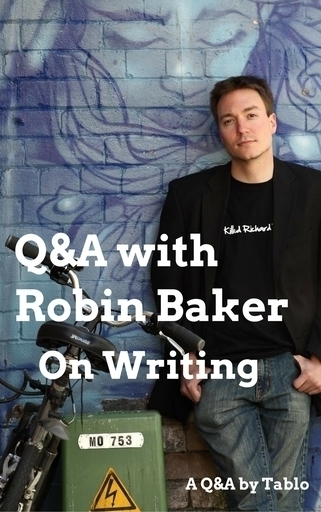 Q&A with Robin Baker: On Writing

A Q&A with author (and funeral director) Robin Baker who's published two novels, Killing Richard Dawson and Chasing the Sun with Pantera Press. A great insight into writing for all aspiring authors.

How did you become more confident in your own writing?

Through practice and refinement. I shared my work with anyone willing to read it, from short stories to scripts to the first-drafts of earlier novels. I listened to feedback and made changes and constantly tried to improve. With time and effort my work got better until I felt it was time to take the next step and seek publication. It took me many years and many failed drafts, but I think if you’re honest with yourself and are willing to put in the work, the improvement in your writing will inspire the confidence.

This isn’t to say I’m now completely confident in my own writing – far from it! – but now I know when what I’m writing isn’t good enough and when I need to improve, which can sometimes be half the battle.

Most writers have to learn to cope with rejection when they first start out. Any words of encouragement for new writers?

It sounds trite, but every rejection is a learning experience. Every piece of feedback you receive will help you improve your work in some way; even if you disagree with the feedback and feel it’s way off-base, there will usually be a kernel of truth or something you can take away from it, even if it’s something simple like rephrasing a sentence to avoid potential confusion in the reader. I tried to stop seeing it as rejection and instead see it as opportunity for improvement.

Do you find it’s useful to write regularly?

Yes and no. Like any other skill or talent, you need to practice and refine your craft in order to improve, but I also think having time away has its benefits. Distance lets you reread your work with fresher eyes and reminds you to look at the trees as well as the forest. It can help you spot holes in your story, or come up with a better idea than what you had originally. It also prevents burn-out and helps keep things in perspective – writing is just one aspect of life and needs to be kept in balance with everything else and focusing on it (or anything else) too much can be unhealthy. Personally I’ve never found the ‘write every day, no matter what’ adage to be very useful; whenever I’ve tried to force myself to work I end up writing junk that gets deleted, resulting in frustration and wasted time. I prefer to work when I’m inspired and excited about the project, which is usually not after an eight-hour workday! I think every writer needs to find a groove that works for them and stick to it – the dedication is the important thing, not the frequency.


When you’re writing a draft, how do you shut off your internal editor and keep going?

I can’t, which is why I take so long! I usually edit as I go which slows everything down tremendously, but I have an almost mental block where I can’t move on until something ‘feels’ right (even if I know it’s going to be changed later). The upside is that, when the draft is finished it’s usually in pretty good condition (from memory Chasing the Sun only had a couple of minor rewrites, otherwise the finished product is almost identical to the first draft). I’d love to be able to turn off the inner editor and it’s something I’m actively working on accomplishing with my next book, but it’s a tough habit to break!


Can you share any general advice for writers that has helped you?

The best advice I ever received was from an author at a writer’s workshop back when I was trying to get my first novel published. I was talking about the book being rejected for being ‘too weird’ and he told me, ‘It’s easier to get famous before you get weird.’ I laughed but understood the point he was making (or my interpretation, at least!): your work needs to be accessible. At that point my novel was an odd story told in an odd way and most readers were bouncing off it, so I decided to keep the story and characters but change the way it was told. I rewrote the story and the feedback I received was immediately much more positive, and the book was picked up for publication not long after.

This obviously won’t apply to everyone, but my takeaway advice is to think about the way you’re telling the story, as well as the story itself. The style and tone can often be just as (if not more) important than the story. Think about perspective, tense, the language used and consider why you’re writing it this way. Does your story need to be in the first person? Would it work better in the past tense? It doesn’t matter how great your story is if an audience can’t get into it.

Is it useful / important for writers to develop an online presence and help market themselves?

It definitely seems to be. I have a minimal online presence and it seems like I’ve missed out on a lot of contact with readers (as well as lost marketing opportunities) so it’s something I’d recommend all new writers take advantage of. It’s something I may revisit once my next story gets closer to publication.


How have some of your favourite writers influenced you?

Growing up I loved Stephen King and read everything he released (and still do!) and he taught me a lot about character. He inspired my love of relatable or sympathetic villains and made me realise the ‘bad guy’ doesn’t necessarily know he’s bad and needs as much motivation and character development as the hero to be believable.

I remember having a watershed moment in twelfth grade English Literature class, reading Heart of Darkness by Joseph Conrad. The idea popped into my head that maybe Marlow wasn’t telling the truth aboard the Nellie and was instead spinning a tale to keep his friends entertained while the ship was anchored. This was the first time the concept of the ‘unreliable narrator’ occurred to me and I immediately wanted to write a story from the perspective of a liar, and the first seeds of Killing Richard Dawson were sown.

Writers like Bret Easton Ellis, Cormac McCarthy, Amy Hempel and Chuck Palahniuk taught me about style and minimalism. I’d always been drawn to stark, sparse prose but most of what I was reading was more in a more ‘traditional’ style (usually third person, past tense, with overly detailed descriptions and rambling narration). It wasn’t until I discovered these authors that I realised minimalist writing was a possibility and that often, less is more. This helped me realise I didn’t need to write to a predetermined format and I could be not only experimental but playful in my work, which felt like a weight off and that I was suddenly free to write how I wanted to write.